the evidence of constant cranking 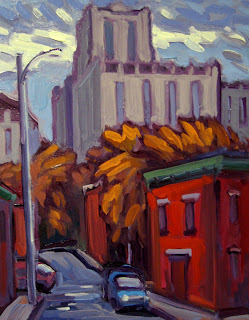 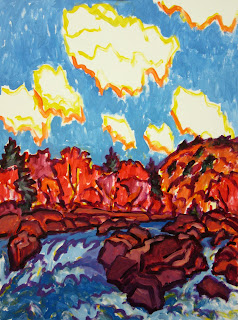 Posted by painterhead at 12:43 PM No comments: 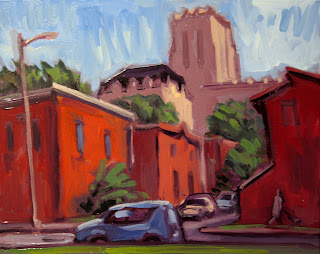 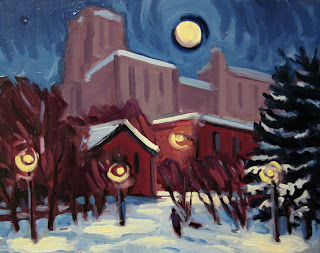 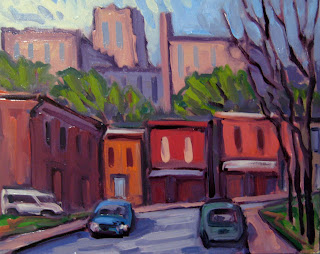 Posted by painterhead at 7:21 PM No comments:

eye in the hand of the brush

Posted by painterhead at 12:42 PM No comments:

Posted by painterhead at 12:39 PM No comments: 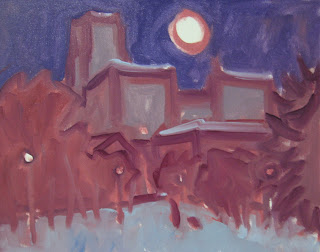 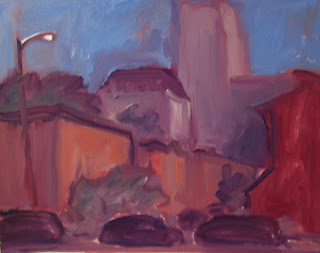 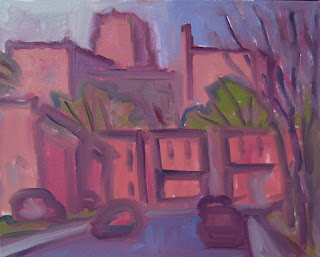 Posted by painterhead at 1:34 PM No comments:

the fortress over le breton 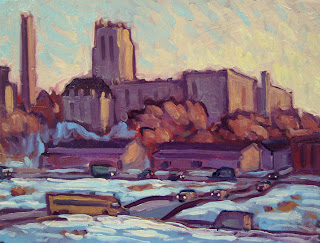 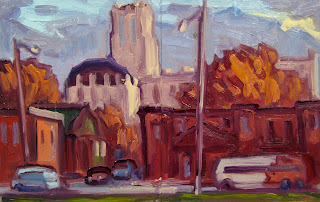 Posted by painterhead at 2:10 PM No comments:

coming to a dominican university college near you 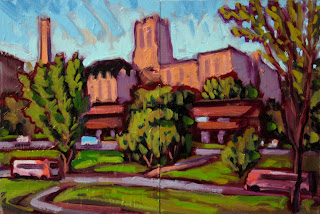 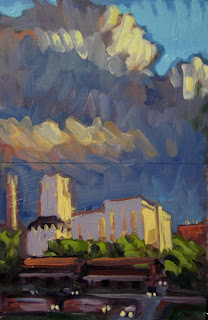 Posted by painterhead at 3:17 PM No comments:

Then and Now: War, History and Non-Violence
(paintings on display at the GCTC in Ottawa until January 11, 2010)

A family trip to Poland in the fall of 2006 brought me face to face with the improbability of my own existence. Somehow, my father and grandmother had survived the Nazi occupation of Warsaw, ground zero in the unthinkable rampage of a genocidal war machine. My grandmother's stories about their life during the war, which had always fascinated me as a child, suddenly took on a harrowing immediacy. Many millions were not lucky enough to tell their stories. And many millions more went along with the madness. But if the tendency to display blind obedience to the criminal abuse of power stands as one of humanity's great weaknesses, then surely our ability to follow the voice of conscience must count amongst our greatest virtues. Janusz Korczak followed that voice and chose non-violence in response to overwhelming brutality, providing a powerful symbol that challenges us in our own time. He refused to turn his back on the fate of the innocent and vulnerable but instead shared in their lot. Throughout history, courageous women and men have broken ranks with the violence of so-called civilization, while devastated communities have been rebuilt and ravaged landscapes have been reclaimed. The images I have painted for this show reflect my interest in this history and my hope that we may yet learn from it.

I hope these paintings create some discomfort. For how can you paint a pretty picture of a terrible place? Our historical consciousness should overwhelm our senses. What amount of aesthetic pleasure can the warm light of an autumn afternoon give us in a place like Auschwitz? And if Warsaw and Passchendaele, Vimy Ridge and Flanders fields are beautiful places to see, then how does that beauty co-exist with the memory of the horrors committed there?

I have painted images from the Great War of 1914-1918 – “the war to end all wars”, the First World War, the necessary precedent to the Second. Images of various former hell on earth and one of a Canadian soldier, Private Harold Lodge, who was shot at dawn for refusing to kill or be killed in the mud at Passchendaele. The bullet he took in the neck for king and country the year prior didn't get him much credit with the men who found his later desertion a capital crime, the same men presiding over the endless slaughter on the front lines.

The images of Warsaw in ruins, forming the backdrop to scenes from the play and from my own family history stand in stark contrast to the new medieval city that greets today's visitor, rebuilt from the utter rubble that the Nazis left behind. No doubt too, when great games have finally ceased, the Iraqis, the Afghans, the Gazans will rebuild their homes, perhaps helped by those from within the societies that brought destruction upon them. Brave young people like Rodney Watson, Kimberley Rivera, Robin Long and Joshua Key – Iraq war resisters from American ranks, come to Canada for reasons of conscience. Some deported back to the United States and jailed. Others still awaiting their fate. Or Travis Bishop, a veteran of the Iraq invasion, but sentenced in August 2009 to a year in prison under the new hope and change regime for refusing to deploy to Afghanistan. Or Omer Goldman, Raz Bar-David Varon and Udi Nir, three of the Shministim, Israeli youth jailed for refusing to kill or be killed in Gaza. Agree or disagree with their positions, but respect the courage of their convictions and the nature of their refusal to take up arms. Given the means of destruction in the hands of willfully blind and angry men, their acts of conscience are nothing less than hope for the very survival of the species.

I dedicate these paintings to the new generation, to my nephew and nieces: Lucas, Julia and Sadie K. I wish for you what my Babcia wished for me and for your fathers, that we never know war. And I add to that my own wish, that you never be seduced by those who plan for war, those who sell it and those who profit from it.

check it out in halifax! 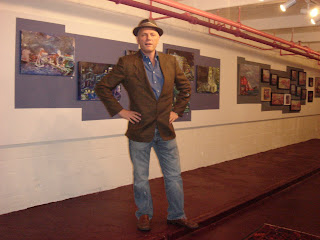 Kyle Jackson and his paintings on display at the Downstairs Gallery in Halifax (see sidebar)
don't miss the paint out and closing reception this weekend!

Posted by painterhead at 2:17 PM No comments:

at the great canadian theatre company in ottawa

these two paintings --
over his dead body
the narrow bridge, the iron gate, the broken wheel
-- and ten more
in conjunction with the opening of the play
"the children's republic"
which tells the remarkable story of dr. janusz korczak

2ND ANNUAL CELTIC COLOURS PAINT OUT
WEDNESDAY OCTOBER 13
part of Cape Breton's largest cultural festival.
participants can submit work to be juried for the opening show of next year's festival.
the paint out north of smokey will be anchored by the unionofpainters.

WINTER PAINTINGS
"now that the season is almost over, it's safe to laugh at it again."
march 19 and 20
lisa la prairie temporary gallery
toronto

FRESH AIR PAINTING
new work by kyle jackson and marc brzustowski
Downstairs Gallery
Hayes Antiques, 5737 McCully St., (902) 455-9223
10 am to 6 pm daily, November 5 to 15
Halifax
Opening Reception: Thursday November 5,
7 pm – 9 pm
Paint Out Saturday November 14: see the artists in action at the
Grand Parade from 12 noon until 2 pm as they paint the city live
Closing Reception Sunday November 15 : meet the artists and see the
paint out work at the gallery from 3 pm – 5 pm

paint outside where the highlands meet the sea and let the sheer beauty of meat cove inspire your creativity. submit your work to be juried for the opening art show of next year's celtic colours festival!

an hour long outdoor painting workshop starting at 10am will precede the paintout. 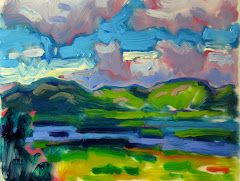 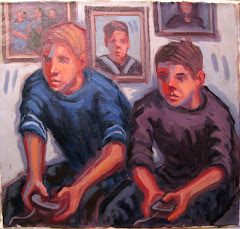 help painter save face -- my own mainly, but yours too. give me three hours of your time and i'll paint your portrait twice, corvette style -- fast and good. i'll pick one and you'll keep the other. sounds interesting? to arrange a sitting, leave your contact info in the comment section.

got a wall that needs painting? time to step out of the frame. here's your chance for original artwork painted right on the wall of your home or office. you can pick an image from the blog or supply one of your own. paintings are done in acrylic. rates are reasonable. leave your contact info in the comments section